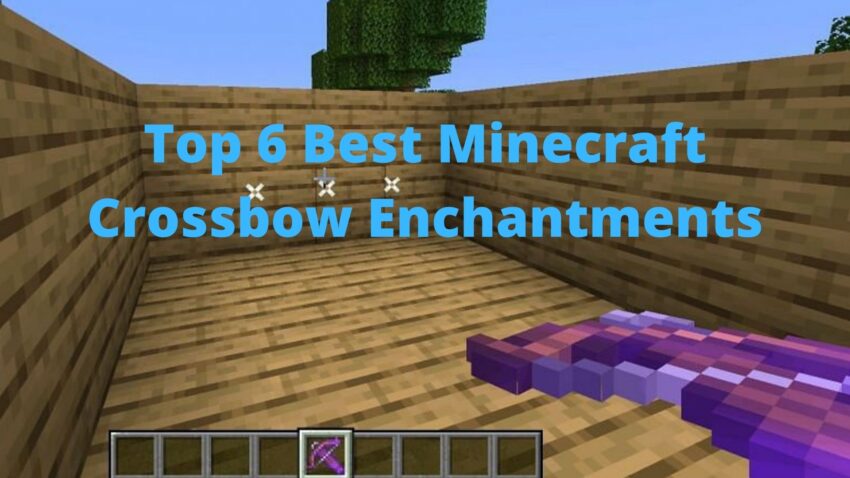 Crossbow is the perfect choice of weapon to use. It has three wondrous enchantments for the weapon, which enhance the power of your crossbow’s performance, making your weapon more powerful depending on the situation, and helps you to kill your enemies.

How You Can Make a Crossbow Deadlier

A crossbow is a weapon that can be enchanted, making the weapon deadlier than before.

There are six different Minecraft crossbow enchantments available in the game, and some of them are not helpful. So make sure which enchantment you want from a crossbow.

You can consider it both a good and a bad thing because if you die and want your crossbow back, you can’t get it back. It’s completely gone. But if you wish for your crossbow to disappear because you have a fear that someone will steal your item and take advantage, then suddenly the enchantment becomes usable.

Piercing is one of the best enchantments you can have on the crossbow. This enchantment enables the arrow released from the crossbow to do fighting even after hitting an existence and successfully pierce their way through a large horde of mobs.

With this enchantment, your arrow becomes super sharp. Now your arrow will kill the entity and, after that, another one. This enchantment usually uses when a horde of mobs tries to attack you. It is good to control the crowd of enemies.

This enchantment is also worked efficiently in mob farms where you need to kill many mobs quickly. And there is also a good thing about this that the enchantment has three levels to it. So the higher you go, the more powerful the shot will be.

With multi-shot, you have the power to shoot three arrows from your crossbow. Only get one arrow in your inventory.

With one arrow shot, three come out. This is a fantastic feature to kill the many hostile targets to clear out. Also, when your enemies are retreating you, it is a better hit chance to get rid of them.

This enchantment can’t combine with the piercing.

Unbreaking is a necessary enchantment that every gadget and piece of armor should have. It helps you reduce the risk of your tool breaking by lowering the durability every time you see it.

Unbreaking will make sure your crossbow lasts longer than before. And the best thing about this enchantment is that it has three levels. The higher you go, the better you get.

It cannot make your bow deadlier than before, but it will help you that your deadly bow lasts longer with you.

The next level of enchantment for unbreaking is level three. When the player enchants the weapon, it increases the chance of durability reduction.

Mending is an enchantment you can have on your crossbow or any other tool or piece of armor. It is a great enchantment, according to many players.

Since the crossbow is the tool for your enemies, mending is the perfect choice of enchantment for durability reasons instead of unbreaking.

When you feel your weapon’s durability falls, you can go and repair your weapon in exchange for EXP or some experience point.

If you have a mob farm set up in your base so you can improve your armors and all tool for free, they are at the brink of shattering into pieces.

If your timing is right, you can never do mining again, and if you keep repairing your tools and armors, you can use them forever. And that’s why we have listed the mending enchantment on number two.

The crossbow has a drawback as compared to the standard bow. It takes a lot of time to load, and zombies can easily come and get your brains in the loading time. Players avoid using it because of the slow reading of the crossbow.

But after using the quick charge enchantment, your crossbow will be above the bow. It gives the ability to reload speed faster and make the crossbow better it is equivalent to the bows fire rate.

You can go up to 3 levels with quick charge enchantment, which makes it a great combination with the other enchantments.

Quick charge is one of the best picks because crossbow would be useless without it. The higher the level you can get on your weapon, the lower the reload time, and it shoots pretty fast, even on the highest level.

With the help of a crossbow, you can get the three enchantments that decrease the pool of enchantments. Thus, you can enchant with a small number, and the crossbow can get half of all enchantments.

If you want to play it in a safe zone, we recommend you to get piercing or multi-shot both on your crossbow first, followed by mending and unbreaking because both enchantments are essentials. In addition, they will make your crossbow more powerful and unbreakable, which is more important than getting a deadly weapon that breaks it after several uses.

Minecraft is a game to build epic stuff and having fun adventures. So it would help if you didn’t waste your time on the things such as grinding for iron or other items. That’s why we suggest you get unbreaking and mending so you can enjoy the best moments of your Minecraft game without worry about the results.